Willamette Week: In Search of Land to Place Tiny House Villages, a Nonprofit Is Taking a Different Tack Than the City of Portland: It’s Looking to Private Land

It’s been 13 months since City Commissioner Dan Ryan pledged to open six “safe rest villages” across the city as an alternative to street camping. Last week, Portland officials opened the second of those villages, in the Multnomah Village neighborhood. (Most of its residents were moved from another pod village in Old Town, which its operator says was closed due to gun violence.) As the clock ticks on Ryan’s pledge, we examine a nonprofit attempting a different model.

Status: A nonprofit called WeShine is close to finishing a tiny house village at a church parking lot in the Parkrose neighborhood. The nonprofit hopes to open the low-barrier village in mid-July and offer priority placement to homeless LGBTQ and BIPOC Portlanders. 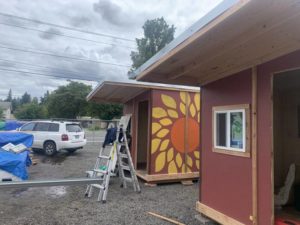 The Portland-based nonprofit, founded only last year, has an ambitious plan: build 10 tiny house villages in 10 different neighborhoods, each with a maximum capacity of 12 residents. Each village will offer pods to specific groups most likely to slip through the cracks of homeless outreach, and each will be outfitted with kitchenettes, restrooms and showers.

WeShine (Welcoming, Empowering, Safe Habitation Initiative with Neighborhood Engagement) is currently in contract negotiations with the Joint Office of Homeless Services to fund operations and building costs for its first two villages.

Not entirely unlike the city of Portland’s planned tiny house villages, the nonprofit has been shopping around for leasable plots of land for the past year. But unlike the city, it’s seeking private rather than public land.

WeShine has had particular success so far with churches. Parkrose Community United Church of Christ is the location of the village close to accepting residents.

Board chair Chris Tanner showed WW around the site on Sunday. Four pods are nearly complete, each adorned with a stenciled sun on the side. The church’s community garden abuts the village. A 16-page manual with dozens of drawings shows the pod structure designed by a retired architect.

Who stands in the way: One barrier the nonprofit seeks to circumvent is obtaining a commercial permit for the Parkrose village’s other planned amenities: a shared kitchen, restrooms and showers. It’s meeting with the city’s Bureau of Development Services this week to discuss.

That’s the same barrier Commissioner Ryan, who oversees BDS, has encountered with the safe rest villages too.

“What we’re hoping for is for them to reduce the requirements and waive some requirements that we don’t need,” McManus says. “We intend to populate it before the community buildings are in, with a rudimentary fashion: a grill and porta-potties. I guess we’ll figure out something with the permit sooner or later.”

WeShine is in preliminary talks with another church in Southeast Portland as a potential site for its second village.

Another entity WeShine approached that owns significant land across the city: the Archdiocese of Portland.

“It just felt like they had their own channels to help the homeless, and that WeShine are new, and they didn’t necessarily feel a need to do a partnership with us,” says David Weaver, co-founder of WeShine—and he acknowledges that there’s significant bureaucracy in churches, too.

Weaver has formed a theory he thinks WeShine’s model will follow. He calls it “the gumball theory.”

“Sometimes there’s a gumball machine, and they get stuck and won’t come out. And then maybe you stick your hand in there and they all fall out. I think that’s going to happen with villages,” Weaver says. “We think we’ll get to a point where the churches are competing with each other to have villages.”

What local officials say: The Joint Office says the contract is likely to be finalized as soon as next month. Margaux Weeke, a spokeswoman for Ryan, says he’s highly supportive of WeShine. “Government cannot do it alone: We need partners from all sectors to step up.”

Sophie Peel is a Portland native who earned a Journalism degree from Mercer University in Macon, Georgia where she reported on education, poverty and politics. She worked for NPR under a fellowship following graduation, and then freelanced for Willamette Week as well as a national publication before returning to the paper full time.

PrevPreviousFirst Pod Goes up at Parkrose Village!
NextOur Village is Going Up, and We Want You to be A Part of It!Next
Menu
Facebook Instagram Youtube