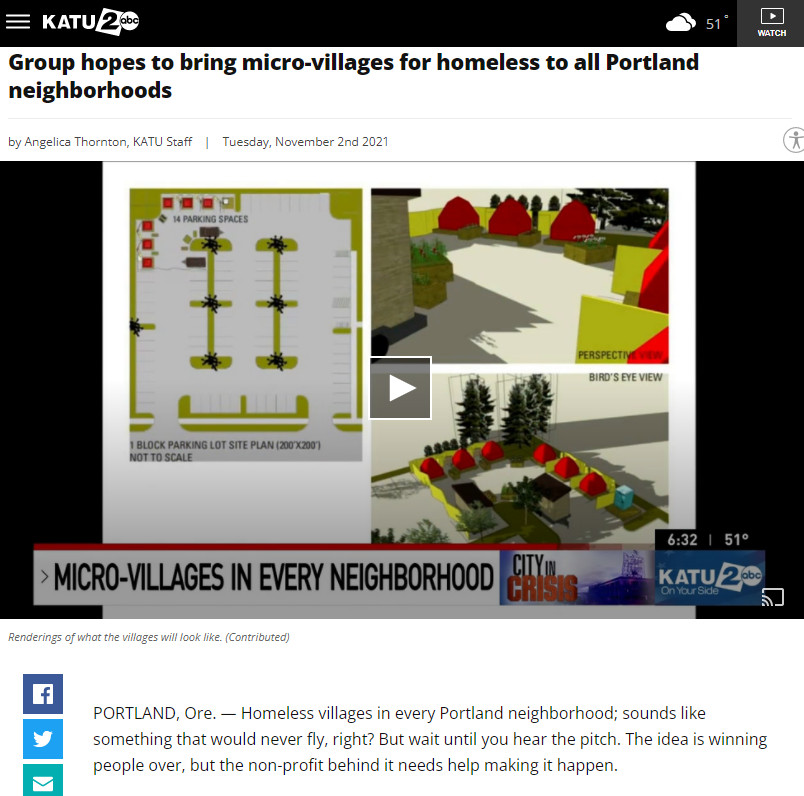 PORTLAND, Ore. — Homeless villages in every Portland neighborhood; sounds like something that would never fly, right? But wait until you hear the pitch. The idea is winning people over, but the non-profit behind it needs help making it happen.

Spend just a little bit of time with Jan McManus, and you’ll see, she cares deeply about her community. Not just her neighbors in houses, but the ones who live in tents a few blocks away at Laurelhurst Park. The retired social worker has had a front-row seat to this worsening humanitarian crisis for two years now.

She felt bad, so she did something. She set up meetings. Not just with people in Laurelhurst, but from all over the city, with social workers, addiction nurses, urban planners, and people who’ve experienced homelessness themselves.

“We started talking about the importance of neighborhoods, and how neighborhoods have to be a part of the solution, and that we needed a proactive and positive way to get neighbors engaged. Not just fighting encampments wherever they are,” said McManus.

They came up with a plan, an initiative called We Shine. Their goal is to build and manage micro-villages in every neighborhood, offering transitional shelter and supportive services for people as they wait for permanent affordable housing.

“We’re going to have some of the basic kinds of rules that other villages have, like no criminal behavior, no violence, treat everyone with respect and courtesy,” said McManus.

The low-barrier villages will be clusters of huts with electricity. There will be clean water, toilets, and showers on-site, similar to what you’ll find at villages that already exist in Portland. But We Shine will be different; no more than 10 to 12 huts per village, easier to manage with less impact on neighborhoods. McManus hopes people will see that and welcome the shelters rather than fight to keep them out. She also believes the small scale will be less triggering for the people who live in the villages.

“People are very, very, traumatized,” said McManus. “And folks with these kinds of issues that we’re talking about, with chronic health conditions or mental health disabilities, or fleeing violence, many of them aren’t going to do well in a large village, and they aren’t going to feel safe.”

And those are the people We Shine will prioritize, the most vulnerable who are often exploited out on the streets.

Multnomah County Commissioner Sharon Meieran is a big fan of the concept.

“I believe that this is one of the best ideas that we should absolutely be supporting,” said Meieran.

Meieran told KATU the county and city should be able to help. She says the money is there after voters approved the $653-million Metro housing bond in 2018.

“It satisfies all the things that we need,” said Meieran. “So, I proposed this as part of my broader proposal I brought to the county. It was not adopted.”

“I am new to the board; however, all appearances to me is that we were sandbagged,” said Estes.

Estes says their concept is less invasive and more reliable than the city’s plan to build Safe Rest Villages. Six of those were supposed to be up and running by the end of 2021. So far, the city has only confirmed two locations and hasn’t even broken ground on one. And even if the plan falls into place perfectly, Estes says it’s still not enough to serve the more than 4,000 people who are homeless in the Portland area.

“You can’t just let it happen. You have to do something. And I think this is a great way to do it, said Estes. “It may not be the only way, but it is a great way.”

So now they’re looking for private land and funding to build the villages, hoping people will recognize the big potential in the tiny villages, underscoring the idea behind We Shine; that many hands make light work, and everyone should share the burden.

“There’s no neighborhood that’s so dense that we couldn’t fit a micro-village or two in them and make a tremendous impact on the lives of everybody and the way our city looks and feels to people,” said McManus.

To learn more about We Shine PDX.