One solution to homelessness? WeShine’s shelter of tiny homes

A look inside Portland’s tiny home villages, where the unhoused try to get back on their feet (Part 1 in a series) 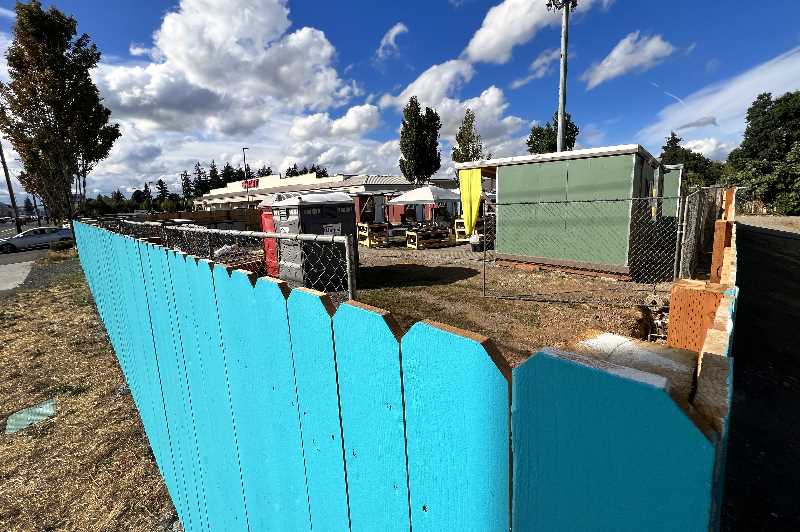 Homelessness has long been front of mind for many Portlanders, and is now the major issue in the November election, according to a recent poll. News broke this week that the city is considering banning sidewalk camping and plans to redirect campers to large, supervised camps.

There are already around 10 alternative shelters in Portland, including the more established BIPOC and Queer Affinity villages, and their precursor, Dignity Village in Sunderland, which was founded in 2000.

The city’s hands are tied when it comes to providing temporary shelter for those who don’t wish to sleep in a dorm and be turned out after breakfast. Commissioner Dan Ryan’s six proposed Safe Rest Villages have been slow to open. One, the Multnomah Safe Rest Village at Southwest Multnomah Boulevard and 25th Avenue, opened in June. Other official branded Safe Rest Villages include one in Menlo Park, which is almost ready to open, and the Sunderland, Reedway, Peninsula Crossing and Northwest Naito sites, which are all still in the permitting phase.

In east Portland, one nonprofit has already built its own village on church land.

The WeShine Village Parkrose at 12505 N.E. Halsey St. sits on private land, which it leases from the Parkrose Community United Church of Christ next door for $1,200 a month. It is well situated, located next to BiMart and Goodwill, with nearby bus lines. WeShine is an acronym, standing for Welcoming, Empowering Safe Habitation Initiative with Neighborhood Engagement.

The shelter’s creators call it a “neighborhood-based micro-village,” offering a temporary place to stay and transitional services for Portland’s vulnerable homeless population.

“We think our plan to build 10 micro-villages over the next several years is a modest goal that shows that we’re serious and want to make a contribution, but it’s not so high a target that it would prevent us from being able to maintain a quality program,” WeShine’s executive director Janet McManus explained during a recent visit. 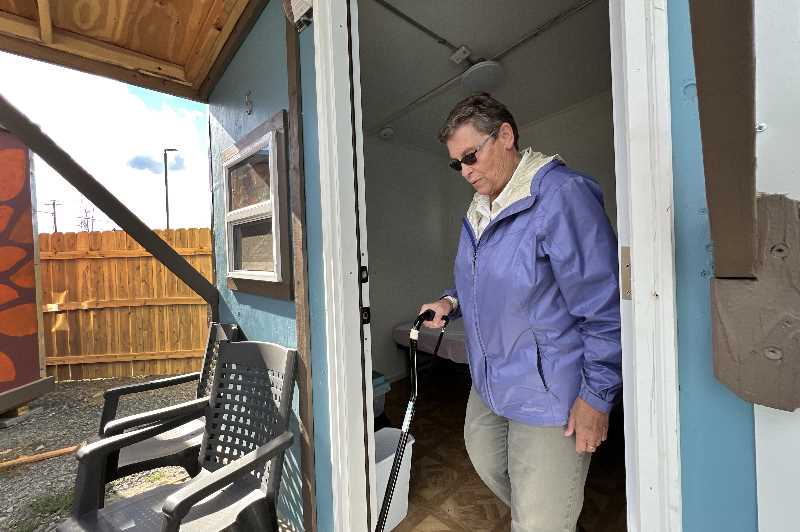 PMG PHOTO: JAIME VALDEZ – Jan McManus, WeShine’s executive director, shows off the $350,000 WeShine Parkrose micro village. She is confident most residents will make it off the streets and into traditional housing.

The eight-foot by-eight-foot units are meant to be more than just sheds. Designed by an architect who volunteers with the group, each was built by hand, with donated community labor from around 100 volunteers. Each space includes an overhang for sitting outside, and two windows. Each comes with electricity, along with a bed, sleeping bag and other necessities, including an electric heater. During the long, hot summer, site managers brought in portable air conditioners for residents. A fence and a lockable gate are key to keeping WeShine Parkrose a safe space, organizers say.

The designers made the communal areas accessible. One of the planter boxes in the vegetable garden has been lowered for wheelchair access, and organizers have avoided gravel paths, since wheelchair users find gravel difficult to navigate.

“We think that a micro-village like this one is a really good answer for a lot of people who have had really complex histories of trauma and will get triggered in a bigger village.”

The future of We Shine

Downtown Portland camps are closest to services and other resources, but get swept more often. Parkrose is different. It is eight miles from downtown Portland, in a part of town known as “The Numbers,” east of 82nd Avenue, where there are large blocks of residential land.

“People are camping here for a reason, they either went to school here, or they have family members or friends nearby, or they had a job in this area. There’s a reason why they pick this area to camp in,” McManus said.

Eventually, the group hopes to expand, with room for up to 12 people. WeShine has applied for a commercial building permit to construct three community buildings to add bathrooms, a kitchen and living space to the campus. Everything is modular, easily moved should WeShine need to find a new location after its two-year lease ends.

Of course, they provide Wi-Fi for residents.

“That’s really necessary if they’re going to get jobs and find housing and services these days,” McManus said.

The plan is to build more villages located on major arterials, close to transportation, business, health and social services, and job opportunities, not “stuck off on the fringes somewhere in a service desert or a food desert,” she said.

McManus is a retired social worker who worked primarily with the elderly and disabled. She also developed special needs housing.

“I’m not a contractor, I don’t really know construction,” she said.

That can be an issue for nonprofits looking to get into this work. Portland and Multnomah County need nonprofits to step up to run these shelters, McManus said, but few nonprofits have a background in both construction, planning and services for the homeless, “Everybody has to reinvent the wheel and start from scratch,” she said.

That tension was felt at a church near WeShine’s campus, which had allowed homeless camps to set up recently.

“The church had some campers on its land for a while, but it didn’t work out very well, because they weren’t able to manage the camping,” she said. “It was getting out of control, like so many of them do.”

WeShine is part of the Alternative Shelter Network, which aims to share the experiences of shelter operators with one another.

“Everybody creates a new handbook every time they open a village,” McManus said. “It’s, like, really?” The network is collecting examples of handbooks which they post online to help new shelters get up to speed.

Through their work, McManus’ organization now knows about city planning, construction and the government agencies involved, including their siloes, fiefdoms, overlapping duties and gaps.

Most of the residents work, so the campus is quiet during the day.

Here, residents share chores; taking care of a communal outside kitchen and a leisure space under a shade tent, with board games and coloring books. And while residents don’t have to be clean and sober, they are held accountable for their behavior.

Everybody contributes eight hours of sweat equity a week, chores like wiping down the porch, the inside of the portable toilets, handling the compost bin and taking the trash out. Everybody must sign a good guest agreement, with basic rules of civilized behavior.

“The Village Life Coordinator acts like a concierge and helps run council meetings, because this is a self-governed village, for the most part,” McManus said. “I have veto power, but I would exercise it very rarely.”

Many of the residents here start at the bureaucratic bottom, McManus said. They lack valid forms of ID or have no credit history.

WeShine allows residents to stay up to two years, as they work to get stable footing.

“The folks we have right now are all working and saving money,” McManus said. “I doubt any of them will be here even a year. But others that aren’t as well-established — say they don’t have jobs, yet, or don’t have a doctor — it’ll take them longer to get stabilized.”

McManus is one of two “nearly full-time” employees. She didn’t take a paycheck for her first year and a half, but she is now. There are two part-time employees too.

Now that it has the blueprint down, WeShine intends to build additional villages, saving money through experience.

The money comes from the county, but McManus says the model is to build them with the support of locals, who are usually happier with villages than sprawling tent and car shanties.

“The folks that we’re serving here are our neighbors, and the neighborhoods need to be part of the solution along with the government and churches,” McManus said. “We’re looking to engage with the neighborhood.”

It’s a closed campus, but neighbors who can pass a background check can sign up to help. 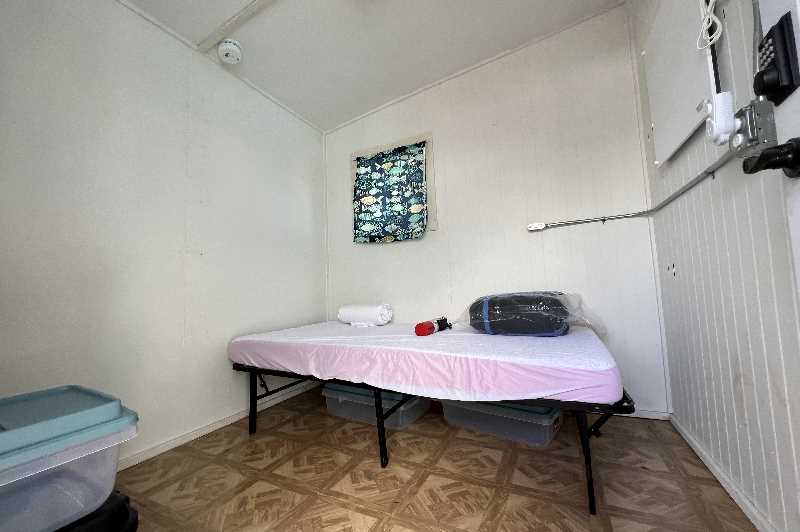 PMG PHOTO: JAIME VALDEZ – WeShine Village Parkrose’s digs are spare, but much warmer, dryer and safer than a tent on the sidewalk, which is where most applicants come from. Smoke alarms and fire extinguishers are included.

McManus considers WeShine a scalable solution and wants to build many more.

“I need sites to build them, I need churches or businesses or donors to step up. And I need to get additional money. So far, the Joint Office has only dedicated a tiny portion of its funds towards this kind of solution. This is so scalable, and relatively affordable compared to other types and can be done faster.”

A partial solution to a complicated problem

Cascadia Action’s Executive Director, Greg Bourget, was knocking on doors and canvassing for environmental awareness when he was surprised to discover people were more interested in talking about homelessness than about environmental issues. He pivoted.

McManus and Bourget consider alternative shelters to be a partial solution to the homelessness problem, because it is cheaper than motels and congregate dormitory style shelters.

“A small complex like this can fit in pretty much any neighborhood. It’s near services and support. If it’s well managed people get a chance to be empowered and have some autonomy,” she said.

McManus knows that tiny home villages are only a partial solution to Portland’s homeless problem, and that other nonprofits will have to help. “It’s going to take a number of nonprofits who want to build something similar, to really start making a dent in this issue.”

She believes Portland’s homeless crisis began 35 years ago with “Many years of disinvestment in public housing, subsidized housing and social services in general, since the Reagan era. Then, escalating rents, wages stagnating for so long, and then you’ve got drugs and mental health issues that we haven’t really addressed as a nation or a community. Put that all together, it’s like a perfect storm of issues.” Micro villages like WeShine are the bridge between surviving in a tent and finding an affordable apartment. “We can’t buy enough motels to make a difference.”

McManus firmly believes that most people who enter the village are committed to finding housing and a job.

“It’s really hard to work on addressing any of your issues, whatever they are, if you never know where you’re going to lay your head the next night and everything’s constantly stolen from you, and you can’t get the health care — all these barriers — they can barely survive.”

What a tiny home village costs

“It all adds up when you get through with it,” McManus said. “We have funding from the Joint Office of Homeless Services, both to build and to operate.” For the shortfall, WeShine must fundraise and write grants.